In Cognition in the Wild, a book I’ll be coming back to later and often in this blog, Ed Hutchins expands on an observation by Herbert Simon, who said that the complicated movements and trajectories of an ant on the beach tell us more about the beach than about the ant. 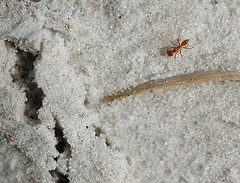 Simon was emphasizing the importance of context in cognition, but Hutchins goes a step forward: “Let us assume that we arrive just after a storm, when the beach is a tabula rasa for the ants. Generations of ants comb the beach. They leave behind them short-lived chemical trails, and where they go they inadvertently move grains of sand as they pass. Over months, paths to likely food sources develop as they are visited again and again by ants following first the short-lived chemical trails of their fellows and later the longer-lived roads produced by a history of heavy ant traffic. After months of watching, we decide to follow a particular ant on an outing. We may be impressed by how cleverly it visits every high-likelihood food location. This ant seems to work so much more efficiently than did its ancestors of weeks ago. Is this a smart ant? Is it perhaps smarter than its ancestors? No, it is just the same dumb sort of ant, reacting to its environment in the same ways its ancestors did. But the environment is not the same. It is a cultural environment. Generations of ants have left their marks on the beach, and now a dumb ant has been made to appear smart through its simple interaction with the residua of the history of its ancestor’s actions.”

Of course, the whole point of the story is what it implies about us: I am as dumb as a barbaric caveman, but I got a better environment. We accumulate knowledge, we embed it in our surroundings, and the next generation will take for granted things that are unbelievably hard for ours to figure out. If humankind manages to stick around for some thousands of years more, when it looks back to our current intellectual and technological achievements they’ll appear as rudimentary to them as the Bronze Age seems to us.

This, in a nutshell, is the reason why good representations of information, which I have been discussing over and over, are so powerful. They synthesize the data we gather about the world into a format that is easily accessible for other people -and for ourselves- any time we need them. An encyclopedia represents centuries of inquiry and discovery; a name tag helps us remember the name of that stranger we just met. Both of them and all other representations in between help make us smart by holding knowledge in our stead.

This quality of representations, which may be referred to as cognitive offloading (since it saves us cognitive effort), comes in two flavours. I’ll call them memory offloading and rules offloading here.

Memory offloading: This is the easy type to spot – anything that holds data for us counts. Books are an obvious example – instead of having their authors talk to us, we conveniently get access to their thoughts whenever and wherever we want. Phonebooks, websites, and dictionaries, hold massive amounts of information that we’ll never need in full, but which we can query on demand. Keys in the computer keyboard in front of you have labels to indicate the characters to which they correspond. We take photographs because they hold much more detail, for a much longer time, than our natural memory can. And so on.

People that can perform at an expert level without the aid of these representations are pretty impressive. My favourite example is blind chess players. The point of blind chess is never looking at the board, having instead the “image” of the match in your mind. It’s a very serious handicap if only one opponent is playing blind – most chess players can’t hold a dozen moves before their mental image crumbles down. Still, my chess instructor fifteen years ago would consistently beat the crap out of me even with this advantage in my favour. How did he do it, I have no idea. And grandmasters can win some half-dozen simultaneous matches while playing blind!

Anyway, my point is that most people depend on memory-offloading representations to do most of their tasks, and we find it extraordinary when someone seems not to. This dependency extends to the other type of offloading as well –although people have a harder time seeing it.

Instead, when playing tic-tac-toe, these rules get lumped into a visually intuitive one:
• That the purpose is to form a straight line from one end of the grid to its opposite end

As I’ve said before, this makes the game much easier, and accessible even to people with no arithmetic knowledge. Similarly, one can always make the nine numbers game more complex by adding rules that increase our cognitive load –for example, representing the numbers in the binary system (1, 10, 11, 100, …, 1001), instead of the decimal system (1, 2, 3, …, 9); which would force us to perform some extra, unusual calculations.

Software tools are particularly helpful when it comes to offloading rules. In a way, this is precisely what they do. Spreadsheets simplify a multitude of tasks –for instance, preparing a detailed budget or calculating the standard deviation of a series of numbers. Email clients connect to servers using a complex protocol that is unreasonable for us to follow personally. In general, computers have come a long way from the card systems of the past to the commodity of our monitors and connectivity, simply because so many of the rules necessary to operate them are embedded in the devices.

Offloading knowledge in representations is so powerful that I’m often surprised to find resistance to doing so. I guess this is what bothers me about developers who don’t comment their programs because “the code speaks for itself” – those who dismiss syntactic enhancements as sugar, who proclaim that Real Programmers code in assembly, or who brag that they don’t need and never will need debuggers. Maybe code speaks for itself, but it speaks slowly. Rejecting these advantages now and then, as a habit to train yourself, may be a good idea (just as it’s a good idea to be able to perform mathematical operations without a calculator); but rejecting them in your professional life is frankly foolish, as foolish as competing as playing blind chess in a world-class tournament.

We are as smart as our environment allows; if we want to achieve greater goals we should free our minds by sharing as much of the work as possible with it.

I'm currently a Postdoctoral Fellow at the SEGAL and CHISEL labs in the Department of Computer Science of the University of Victoria.
View all posts by Jorge Aranda →
This entry was posted in External cognition, XCog. Bookmark the permalink.

3 Responses to Fun with representations VI – Sharing the load